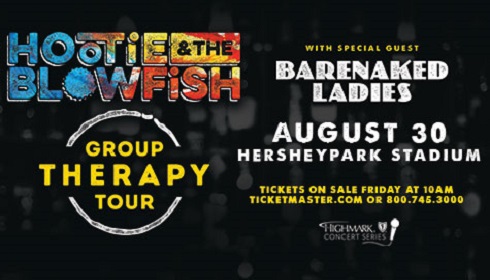 7:30 PM
Iconic pop-rock band Hootie & the Blowfish appeared on NBC’s TODAY this morning to announce a highly anticipated return to full-time touring in 2019, as the foursome sets out on the 2019 Group Therapy Tour with direct support from special guests Barenaked Ladies.  The band formed by Mark Bryan, Dean Felber, Darius Rucker and Jim “Soni” Sonefeld during their time as students at the University of South Carolina will visit 44 cities on the tour produced by Live Nation.“Once the four of us met and started playing shows, we toured for years before signing a record deal,”reflects Rucker who, in the 10+ year break since their last formal tour and nearly 15 years since their last studio album as a band, has charted nine No. 1 singles on Country radio.  Felber notes, “Having those shows at fraternity houses, clubs and dive bars under our belt prepared us for success to a degree, and it’s something we’re proud of – that we put in the work – but what matters to me the most is that we’re still a band all these years later. We’ve never stopped being a band.”