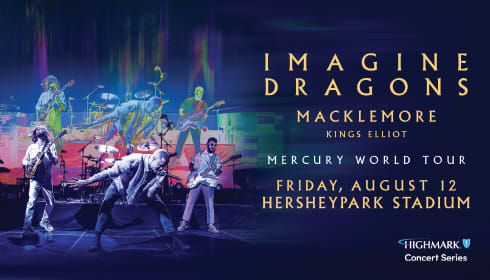 6:30 PM
Imagine Dragons announced 20 new show dates to the Mercury World Tour, including a stop in Hershey, Pa. Imagine Dragons last performed at Hersheypark Stadium in June of 2018. Produced by Live Nation, the summer North American tour celebrates the release of their latest album, “Mercury – Act 1.” The tour will mark the band’s biggest North American shows of its career to date.

On the heels of “Enemy,” a chart-topping single, Imagine Dragons unveiled their new single, “Bones,” the first new music from their forthcoming release “Mercury – Act 2.” A spirited examination of life and death, the song explodes with an infectious chorus that celebrates the intangible spark that ignites our beings.