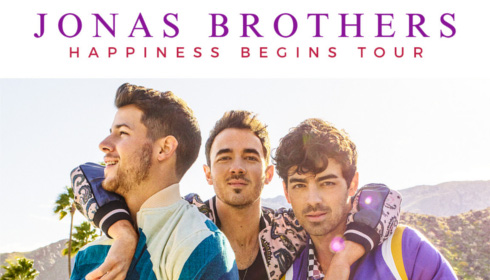 7:30 PM
After building overwhelming anticipation, GRAMMY® nominated multi-platinum powerhouse trio, Jonas Brothers, announced the details for their 40-city Happiness Begins Tour this summer and fall with special guests Bebe Rexha and Jordan McGraw. The announcement coincides with the launch of the pre-order for the band’s highly anticipated comeback album Happiness Begins, as well as the launch of their official merchandise store online today.The Happiness Begins pre-order will include instant gratification downloads of the band’s hit singles “Sucker” and “Cool,” produced by GRAMMY® Award-winning songwriter, producer, and lead singer of the multi-platinum band OneRepublic, Ryan Tedder. The third instant gratification titled “Only Human,” produced by GRAMMY® Award-winning producer Shellback, will follow. Not only will this be the group’s first album since 2009, but it stands out as one of 2019’s most anticipated records.