Nickelback: All The Right Reasons Tour 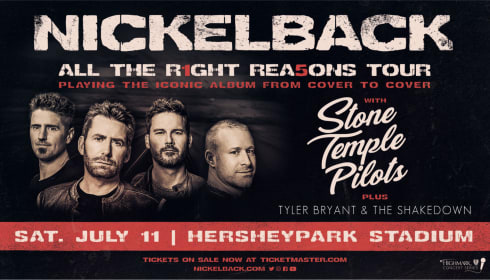 Multi-platinum, chart-topping rock band Nickelback is set to hit the road this summer, bringing some of their biggest hits to venues across North America on the band’s 2020 headlining tour. Stone Temple Pilots and Tyler Bryant & The Shakedown will join as special guests.
Nickelback will celebrate the 15th anniversary of their Diamond-Certified, No. 1 album All The Right Reasons by performing the album in its entirety, in addition to a slew of hits fans know and love. The album produced an astounding seven radio singles, five of which were Top 20 Hot 100 singles including “Photograph,” “Rockstar,” “Far Away,” “If Everyone Cared,” and “Savin’ Me”.

Upon release, All The Right Reasons debuted at number one on the U.S. Billboard 200 chart and marked the band’s third straight No. 1 debut in their native Canada. All The Right Reasons spent 110 weeks in the Top 30 on the U.S. Billboard 200 chart and received multiple Gold and Platinum certifications around the world. With over 19 million copies sold worldwide, the iconic record is one of the best-selling albums in North America.