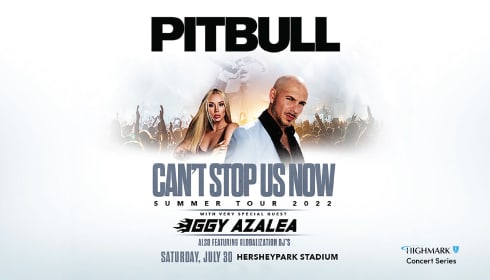 8:00 PM
After selling out over 40 shows and performing to over 450,000 fans last year, GRAMMY-winning superstar Mr. Worldwide, Pitbull, has announced his latest North American “Can’t Stop Us Now Tour” featuring Iggy Azalea and openers SiriusXM Globalization DJ’S. The extensive 50+ date run, produced by Live Nation, kicks off this July in Raleigh, NC, stops in Hershey, Pa., on July 30 and wraps up on October 19 in Hollywood, FL.