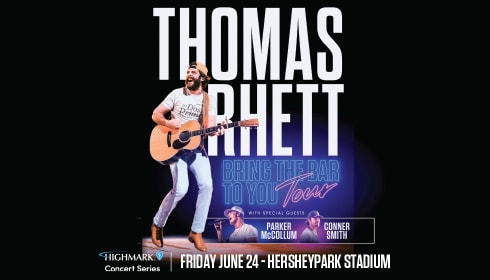 7:30 PM
Five-time GRAMMY-nominee Thomas Rhett is bringing his headlining "Bring The Bar To You Tour" to Hershey, Pa. Produced by Live Nation and presented by Dos Primos, the tour kicks off on June 17 in Gilford, NH, and will visit over 30 cities throughout the U.S. Taking its name from a to-be-released song from the superstar’s upcoming sixth studio album "Where We Started,", the tour features special guests Parker McCollum and Conner Smith.