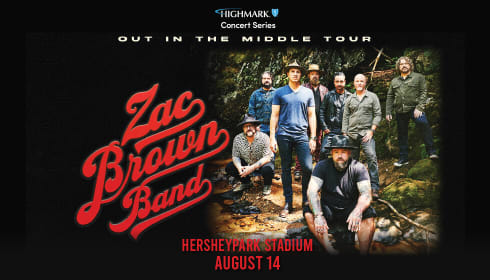 7:00 PM
The “Out in the Middle Tour” will see the band return to some of the nation’s most iconic venues. The new set of dates follows the incredibly successful “The Comeback Tour,” where the band staged their comeback to live performances, including a show at Hersheypark Stadium in 2021 following a COVID-19 hiatus.

“Performing in front of millions of fans around the world is one of the most electrifying and humbling feelings,” said Brown. “We’re so excited to go back out on the road and keep the unbelievable momentum going from ‘The Comeback Tour.’ It’s been such an incredible year for the band, debuting some of the best music we’ve ever made, and we are thrilled to continue playing live for our amazing fans.”

The “Out in the Middle Tour” will showcase the band’s old-school country roots and southern-rock style, serving as an ode to their country pride and life’s simple pleasures. Joining the band once again will be Caroline Jones, who performed as a special guest during "The Comeback Tour."