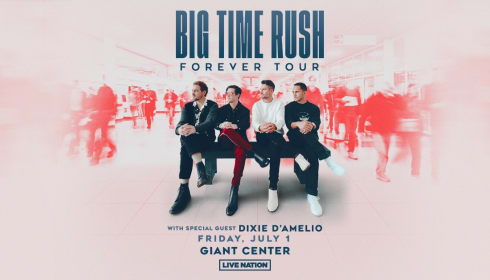 Big Time Rush became an overnight sensation in November 2009 when the scripted television show “Big Time Rush” launched on Nickelodeon. The show focused on the Hollywood adventures of four hockey players from Minnesota after they were selected to form a boy band. Carlos, Kendall, James and Logan came to life as a band off the screen, releasing three full-length albums and performing across the globe. As the show concluded in July 2013, and after four years of recording music and touring as a band, they went their separate ways but remained close friends through the years.

After seven years, in an effort to bring joy to their fans during quarantine around the world, the members of Big Time Rush appeared together as a group to send a message of love and togetherness. This was soon followed by a socially distant performance of an acoustic version of their smash hit, "Worldwide." These appearances resulted in excitement amongst their fans and in the media, followed by Big Time Rush receiving over 10 million streams in 2020 alone.
The band finished off 2021 with a performance at iHeartRadio Jingle Ball in Philadelphia, as well as two sold-out shows in Chicago and New York City, capping it off with the release of their first single in eight years, “Call It Like I See It,” on December 13.