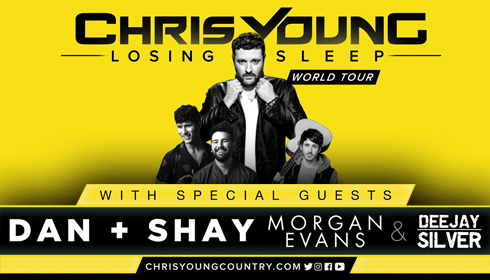 7:30 PM
After playing more than 30 sold-out arena and amphitheater dates, being named an ACM Male Vocalist nominee and scoring his 10th No. 1 single, Chris Young has added a stop in Hershey, PA to his “Chris Young Losing Sleep 2018 World Tour,” on November 9. Special guests Dan + Shay, Morgan Evans and Dee Jay Silver will join the multi-platinum entertainer, hailed “a true country singer” (Lincoln Journal Star) who has “handily made the leap to headliner status” (Green Bay Press Gazette) and puts on a “riveting performance” (La Crosse Tribune), on the added dates.

Recently inducted as a member of the iconic Grand Ole Opry, Chris Young achieved another milestone in 2017 with the release of Losing Sleep, his second consecutive studio album to debut at No. 1 on Billboard’s Top Country Albums Chart. At the age of 33 the RCA Records artist has seven albums, ten No. 1 singles and seventeen R.I.A.A. certified projects including the 2x Platinum single “I’m Comin’ Over” - the namesake for his Gold certified album which earned multiple ACM, BBMA, CMA, CMT, Grammy and RDMA nominations and scored three consecutive chart-topping singles. A prolific creator, Losing Sleep is Chris’s third project in less than two years and the title track is his eighth No. 1 as a songwriter.

Named “one of his era’s finest traditionalists” by the Associated Press, Chris has quickly become an international ambassador for country music, performing to capacity crowds around the world including the sold-out C2C Festival in the UK. With a hit-packed set that highlights his ten chart-toppers — including back-to-back No. 1s “Losing Sleep,” “Sober Saturday Night,” “Think Of You,” and “I’m Comin’ Over” — and seventeen Gold/Platinum/Multi-Platinum certified projects, the Grammy and ACM nominated vocalist is headlining the Chris Young Losing Sleep 2018 World Tour, with more than 55 arena and amphitheater dates on the books.