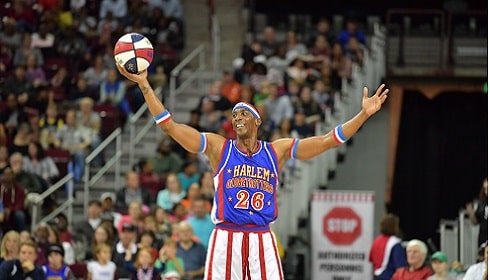 2:00 PM
Featuring some of the most elite dunkers on the planet, exceptional ball handlers, and Guinness World Record holders, a Globetrotters game is more than just basketball – they are the ultimate in family entertainment that will bring smiles and fan interaction to people of all ages.

The Globetrotters show will feature a star-studded roster, including Showmen like Big Easy Lofton, Hi-Lite Bruton, Ant Atkinson, and Hammer Harrison, as well as fan favorites Firefly Fisher, Bull Bullard, Thunder Law and Cheese Chisholm. To match the growing popularity of the Globetrotters’ female stars, the team will also bring the largest female roster in team history to fans across North America – including TNT Lister, Hoops Green, Torch George, Swish Young, and Mighty Mortimer (rosters will vary in each city and are subject to change).

After virtually every game, the Harlem Globetrotters remain on the court for autographs and photographs with fans (subject to availability).

The Harlem Globetrotters® are legendary worldwide, synonymous with one-of-a-kind family entertainment and great basketball skills for the past 92 years. Throughout their history, the Original Harlem Globetrotters have showcased their iconic talents in 123 countries and territories on six continents, often breaking down cultural and societal barriers while providing fans with their first-ever basketball experience. Proud inductees of the Naismith Memorial Basketball Hall of Fame, the Globetrotters have entertained hundreds of millions of fans – among them popes, kings, queens, and presidents – over nine thrilling decades. The American Red Cross is the official charity of the Harlem Globetrotters. Sponsored by Entenmann’s Donuts ®, Ticket Galaxy and Baden Sports, Harlem Globetrotters International, Inc. is a wholly-owned subsidiary of Herschend Enterprises, the largest family-owned themed entertainment company in the U.S.