Alton Brown: Live! Beyond The Eats - The Holiday Variant

Buy Tickets to Alton Brown: Live! Beyond The Eats - The Holiday Variant on November 23, 2022 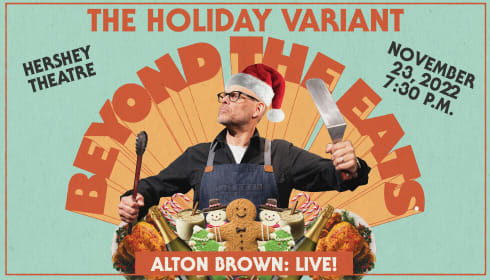 7:30 PM
Television personality, author, and Food Network and Netflix star Alton Brown announced Alton Brown Live: “Beyond The Eats – The Holiday Variant” tour is visiting Hershey during the holiday season. Brown originated the live culinary variety show with his “Edible Inevitable,” “Eat Your Science,” and “Beyond The Eats” tours that have performed in 200-plus cities with more than 550,000 fans in attendance. His latest production mixes together science, music, food and festive fun into two hours of pure entertainment.

Brown says fans can expect “more cooking, more comedy, more music and more potentially dangerous science stuff with a sprinkle of seasonal spices. Plus, you’ll see things I’ve never been allowed to do on TV.” Critics and fans have raved about the interactive components of Brown’s shows. He warns, “Prepare for an evening unlike any other and if I call for volunteers…think twice.”

Buy Tickets to Alton Brown: Live! Beyond The Eats - The Holiday Variant on November 23, 2022