History of the Hershey Theatre

"The more beautiful you make something which people can see and use, the more enjoyment they will get out of it."

The magnificent Hershey Theatre® was conceived by entrepreneur and philanthropist Milton S. Hershey in the early twentieth century. Lancaster architect C. Emlen Urban drew the plans for the Community Center Building in 1915; however, it was built between 1929 and 1933 as part of Mr. Hershey's "Great Building Campaign" of the Great Depression, which also produced such Hershey landmarks as The Hotel Hershey®, the Hersheypark ® Arena, and the Hersheypark Stadium.

Dedicated in September, 1933 during the town's (Hershey, PA) 30th anniversary celebration, the $3 million Community Center - and its star occupant, the Hershey Theatre - soon became center stage to the world's leading performers and shows. From its inception, the theatre was designed to be a beautiful place for Central Pennsylvanians to gather and enjoy a wide assortment of entertainment.

When next visiting the Hershey Theatre, count the number of lions that the architect placed throughout the theatre. Hint: There are more than eighteen!

The theatre's Aeolian-Skinner organ has over 4,000 pipes. The largest are over thirty feet tall; others are smaller than a child's finger.

The beauty of the architecture and the workmanship is evident from the moment the doors open into the Hershey Theatre Grand Lobby. From floor to ceiling, the tile area is breath-taking. The floor is laid with polished Italian lava rock. Four different types of marble, both imported and domestic, shape the walls and exquisite series of arches. The ceiling is filled with bas-relief images of sheaves of wheat, beehives, swans, pastoral scenes, Apollo and Assyrian war chariots, attracting patrons' eyes to the beautiful art above.

In the orchestra, or main level of the auditorium, the Hershey Theatre theme is fully revealed: the audience is transported to the grand style of Venice, Italy. Prominently mounted above the stage is the winged lion, the symbol of the city of Venice. The sides of the auditorium appear to be the outer walls of a Byzantine castle, complete with balconies on windowed towers. At times, the theatre's six-ton fire curtain is lowered, displaying an amazing water color picture of the city of Venice, with the Grand Canal flowing past the Doge's Palace. The overhead proscenium arch is inspired by the design of an ancient canal bridge, such as the noted Bridge of Sighs.

Atmospheric ceilings were a hallmark of early 20th-century theatre design. The Hershey Theatre "stars-and-clouds" ceiling is suspended from the roof. Utilizing the radiance of colored lights, the sky changes scenes from sunset to dusk, from dawn to sunrise. Within the hanging ceiling, 88 small holes are fitted with 10- and 25-watt light bulbs. When lit and twinkling, patrons can feel as if they are indeed outside of a huge castle, awaiting a royal performance, passing the time by stargazing.

Supplying the finishing touch, a stereopticon machine is held on a side balcony of the theatre. An 18-inch round disc, resembling a record album and etched with images of small clouds, rotates slowly. The light from a 1,000-watt bulb projects through the disc, transforming the clouds to more than forty times their etched size; and, as the disc turns, they gently float through the evening sky.

Though the front of the Hershey Theatre house is magnificent, its heart lies backstage, where the magic is created. The stage measures 75' from wall to wall, and 44' from the apron to the back wall. The stage is equipped with five elevators, which can rise to a height of seven feet; the back elevator can also be moved below stage level to transfer scenery to and from storage. The elevators can be stopped at any level to provide a variety of settings and platforms for plays and musical attractions.

The front elevator holds the theatre's sound system for movies. The movie screen, measuring 18' x 44'-6", lowers on its 3-ton steel frame directly in front of the gigantic bullhorn. Millions of tiny holes in the coated vinyl screen permit the sound to permeate and reach the audience.

The Hershey Theatre provides 44 counter-weighted lines for sets and lights. These lines permit the stagehand, or "flyman," to lower the pipes onto which the various backdrops and sets are attached, then match their weight on the pulley apparatus with counterweights, and "fly" them to their appropriate spot with relative ease.

Take a behind the scenes look at the historic Hershey Theatre. 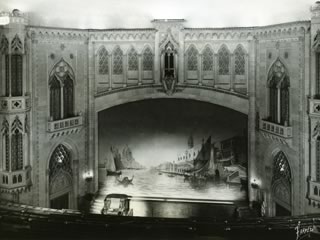 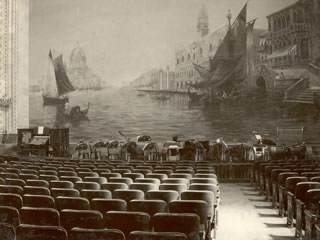 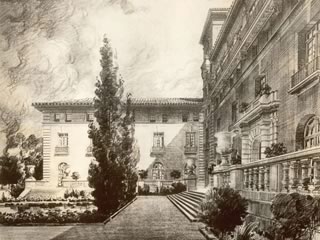 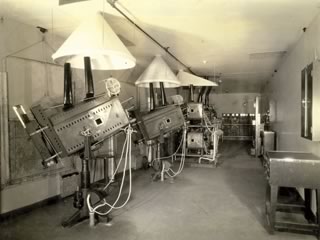 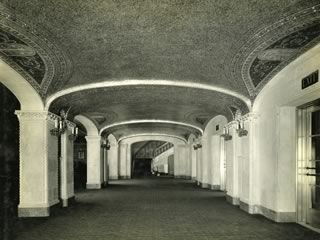 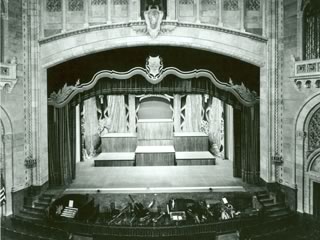 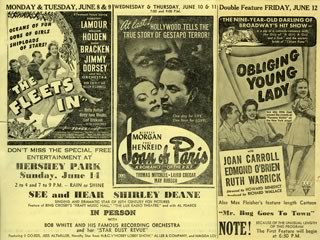 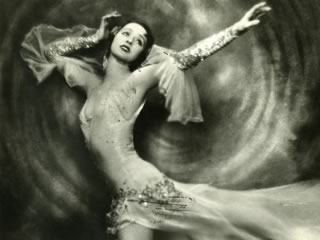 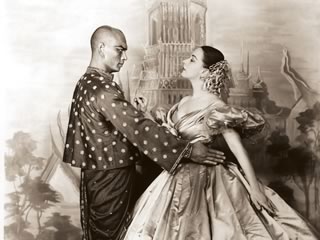 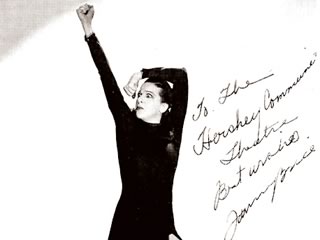 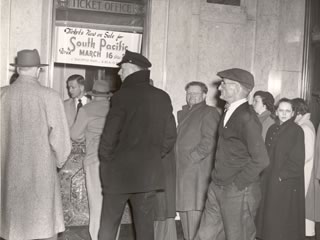 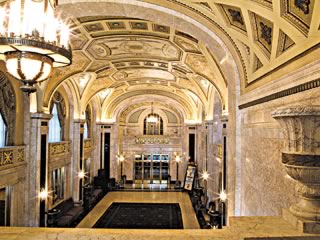 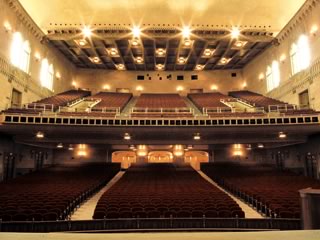 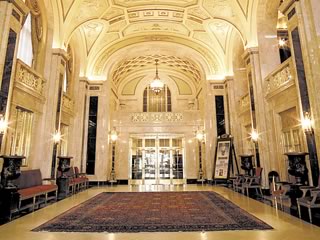 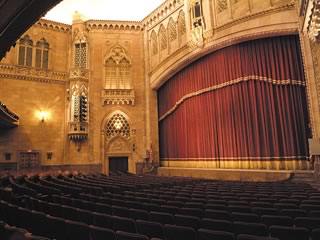 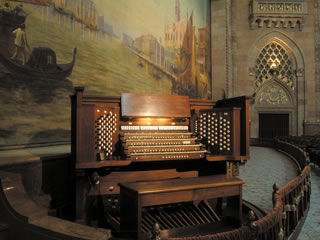 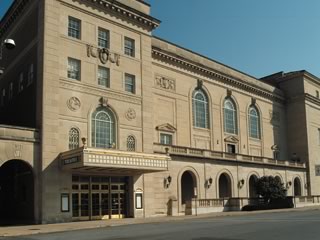 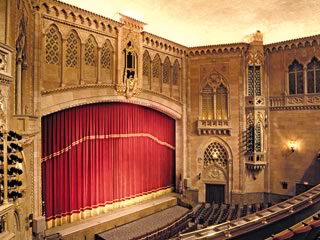 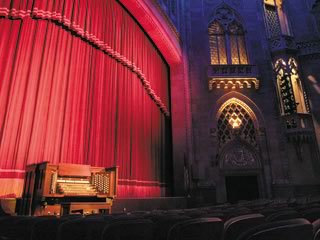 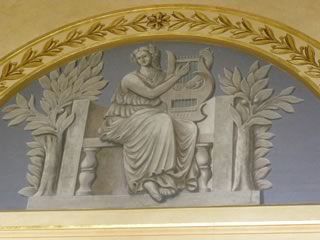 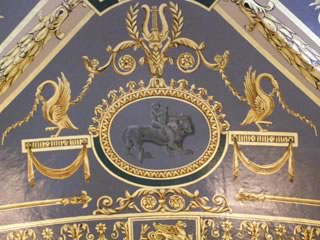 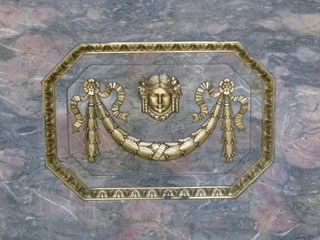 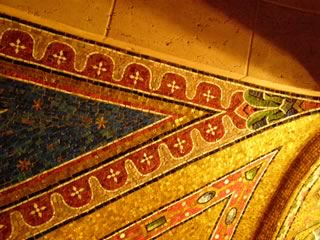