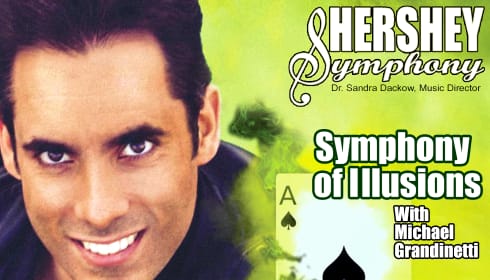 March’s “Symphony of Illusions” brings a full-length stage-magic show to the Hershey Theatre, starring Michael Grandinetti.  Los Angeles-based magician, Michael Grandinetti, is a talented and innovative illusionist with performances on national and international television, and in stadiums, arenas, and theaters around the country.  The Hershey Symphony will be on stage for the entire show providing a live-musical backdrop for the grand illusions.

Music selections include Grieg’s “In the Hall of the Mountain King”, Mussorgsky’s “A Night on Bald Mountain”, Bizet’s “Danse Bohême” from Carmen, Saint-Saëns’ “Danse macabre”, Khachaturian’s "Sabre Dance", Stravinsky “Infernal Dance of King Kastchei” from The Firebird and, of course, selections from John Williams’ Harry Potter scores.  Greg Woodbridge will join us as guest conductor and there is a rumor he may be cut in half during this show, which would make him a semiconductor.