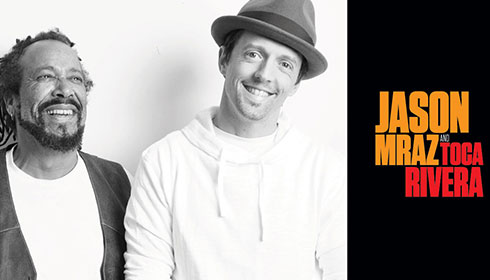 7:00 PM
Jason Mraz has announced plans for a very special fall tour. “Live In Stereo” will see the multiple GRAMMY® Award winner partnering with longtime percussionist Toca Rivera for intimate acoustic performances beginning November 23rd and then continuing through late December. The announcement of “Live In Stereo” comes on the heels of the upcoming release of Mraz’s hugely anticipated new studio album, Know. The follow-up to 2014’s YES! arrives at all music retailers and streaming services on Friday, August 10th; pre-orders are available now.

Mraz’s first full-length studio recording in over four years, Know. Know. is heralded by Mraz’s current smash single, “Have It All” which he performed last week on the nationally syndicated LIVE with Kelly and Ryan. Currently ascending the Top 15 at Hot AC radio outlets nationwide while also earning more than TK million streams in the U.S. alone, “Have It All” is joined by a very special acoustic version of the song, available for purchase.