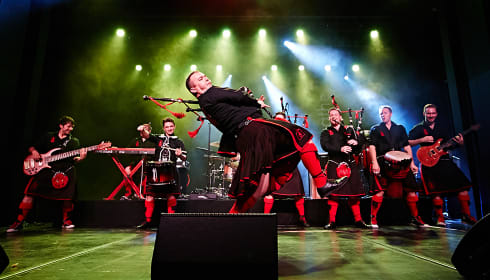 8:00 PM
This 9-piece ensemble consisting of pipers, guitarists, keyboards, and drummers has four music degrees from the Royal Scottish Academy of Music and Drama, and all the pipers and drummers have played at the top level in bagpiping.
The Chillis have never been more in demand for their infectious style of feel-good music, which appeals right across the age range to people all over the world. They are the very best musicians from Scotland and across the globe – many holding World Champion titles and all serious players with impressive credentials and qualifications.


Founded by veterans who served in World War I who had their first exposure to bagpipes while serving in Europe, The Kiltie Band of York has continuously upheld the tradition of Scottish regimental pipe bands since their premier performance in a 1928 Armistice Day  (Vetran's Day) parade. With the permission of King George V of Great Brittan, the Kiltie Band adopted the Royal Stewart tartan which it still wears today in it's many performances in central and eastern Pennsylvania parades as well as entertaining crowds in Maryland and New Jersey.  The band has also performed on stage with Irish music legends The Chieftains, Gaelic Storm and is looking forward to a return to the Hershey Theater stage on March 13 to perform again with the Red Hot Chili Pipers.